The judging is the nation’s largest cheese competition and recognizes only the highest quality cheeses based on both aesthetics (flavor, aroma, and texture) and technical accomplishments.  43 cheese specialists judged the 2018 competition, which included 1,954 entries representing 259 creameries from North and South America.  Additional information about the American Cheese Society and its competition can be found here and a full list of Oregon winners below.

Consumers will have the opportunity to taste winning cheeses from Oregon creameries at fine groceries during Oregon Cheese Month in September, at the Guild’s annual festival October 6 in Portland, The Wedge, and at creameries around the state on the Oregon Cheese & Food Trail. 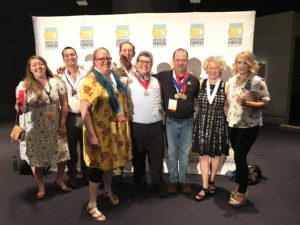 Founded in 2006, the Oregon Cheese Guild is dedicated to the art and craft of making cheese. The Guild is a collaborative effort to increase awareness of Oregon’s artisanal cheeses, create educational opportunities, and provide a platform for cooperation and shared resources among Oregon cheesemakers.